Last week I made a promise to you that I will try to add a new post at least once a week.  That was a week ago so I am making good on my promise.  I will try to post updates on a more regular basis.  That way you do not have to go a full week without one of my delicious new posts.  With all the announcements out of the way, grab your favorite snack, sit back and enjoy my latest journey through the wild and crazy wilderness known as the kitchen.

The velvet surface of the tar pits, I always found it amazing how something that is not a solid can be thick enough or strong enough to trap an animal causing its death.  If you look closely you can almost see the bones of the animals it has trapped.  I know what you are thinking, why would you be writing about the tar pits on a baking blog and two those just look like walnuts.  If you caught on to my little game congratulations you are absolutely right, this is the batter for brownies.  If you did not catch on well now you know, welcome to the party.  Before you say anything yes there are some similarities between tar and these brownies.  The brownies smell and take a whole lot better than the tar does (Not that I ever tasted tar before) but it has the power to trap larger mammals (Mainly me) in their chocolaty goodness.  There I stay trapped until one of two things happen.  I either eat the entire try of brownies, getting rid of the temptation or I fall victim to a sugar coma where I will be forcefully removed from this death trap.  I mean there is a reason there was an ice-cream flavor “Death by Chocolate” and there was a reason why this flavor was discontinued shortly after it appeared.  Coincidence, I think not.

When embarking on a dangerous journey like this one it is always better to travel with a friend and this is how this deadly decadent voyage began.  After my last post my friend Amanda informed me that she had some old recipes that she would let me borrow and I jumped at the opportunity to try and bake it.  To get ready to start baking I first measured out all the ingredients to get them ready to add to the recipe.  The first thing I noticed with this recipe is the amount of sugar it uses. 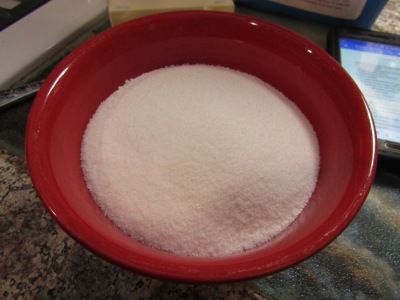 Any recipe that uses a full bowl of sugar is alright in my book.  Now I am sure that sugar coma comment makes more sense now.  What I really enjoyed about making these brownies is melting the chocolate down to get it ready to incorporate it into the dry ingredients.  While melting the chocolate it released the most delicious aroma that I ever experienced while baking.  The smell of chocolate wafted out of the sauce pan and filled the entire kitchen.

I mixed all the ingredients together and put it in the oven to bake. So far everything is going very smoothly, I thought this is going very well.  I should have known that this was too good to be true.  That did not cross my mind until the very end.

I set the timer for the allotted time and I got to cleaning part of my mess up.  After the timer let me know that the desired baking time has passed, I made the necessary preparations to remove the freshly baked brownies from the oven.  Like a good baker I inserted a toothpick to check to see if the brownies were finished.  Unfortunately unlike a good baker I ignored the toothpick. In my defense I ran into an issue where the brownies were supposed to be somewhat moist in the middle and I over baked the brownies because I did not realize it.  This time I seemed to go the other way.  It could of used about another 10 minutes in the oven.  While I was patiently waiting for this confectionary delight to cool I got busy working on part two of this dessert, the frosting.  When I found out that this recipe had a frosting to top the brownie it made me even more excited to try this recipe out. This is where I ran into my second problem.  When measuring the confectionary sugar to make the frosting I did not use a spoon to scoop it into the measuring cup.  I just took the measuring cup and dug it into that sweet powdery goodness.  This method of measuring the sugar leads to using way too much sugar making the frosting very stiff.  Now the spreadable frosting resembled a paste that you can roll out and mold.

In the end what was supposed to be a light spreadable covering became, a dense winter blanket that I used to tuck the brownies in for the night, just before I cut them up into tiny personal pieces.  Wow that just took a dark turn, then again judging by the tone set in the beginning of this post I think you saw it coming.

This was a long and tiring journey but the end result

was totally worth it.  Thank you so much for taking this journey with me and for all the support that you give to me.  Also I would like to give a shout out to Amanda; I would really like to thank you for this delicious recipe.  As this sticky journey comes to an end always remember to listen to the inanimate object (the toothpick) when it says that you need more baking time chances are you need more baking time.  Also when measuring confectionery sugar use a spoon to fill up the measuring cup and do not use the measuring cup as a scoop.  That is all I have for today, thank you all for reading.  As always remember to never stop learning and to always stay hungry.